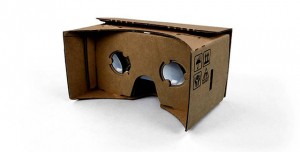 Those who want to feel virtual reality in a simple and inexpensive way you can use Cardboard VR or VR Box available to use combined with your smartphones.

This simple box made of cardboard, lenses and the smartphone changes a phone into a VR headset. In order to work properly with VR cardboard, smartphone should use suitable applications.

The problem with the cardboard is that it can only be used with certain phones, and which one will be used depends on whether it is fully or partially compatible with the device.

Using the Cardboard doesn’t give you the full quality sensation of being inside virtual world, mainly because of low-latency VR that smartphones offer. This is not a problem if the cardboard VR is used to watch simple demos, but for experiencing more complex VR contents that demand fast head movement it could stutter and make consumer feel a bit nauseous.

Those who would like to try on the cardboard should know that this device isn’t strapped to head like Oculus Rift or HTC Vive. It should be held with hands up to face and could be a bit annoying. The positive thing is that it doesn’t have disturbing cables and it is not heavy. With the cardboard it is easy to quickly forget about the outside world and let yourself enjoy an immersive new technology, so holding the device isn’t big problem.

Bringing low-cost VR to the masses may not be Cardboard’s main intention. Its more likely that this kit is made to raise public awareness of VR. Cardboard could efficiently introduce the potential of VR to those who didn’t show much interest in VR gaming and other immersive experiences.

VR Box is on of the best budget VR experience options. Unlike Cardboard VR Box is made of plastic which makes it more durable. The quality can’t be compared to Daydream View, nor does it measure up to Gear VR but for basic VR experiences VR Box is great choice.

It’s obvious that Cardboard have some technical limitations, but it is sufficient to represent a basic VR experience and get new users curious enough to consider buying more expensive devices when are available. It could also encourage developers to make the next generation of immersive digital experiences available to everyone.

Crafty gadget-junkies could build their own cardboard from everyday items founded in garage or at your local hardware store. To get started one should have cardboard sheet, minimum size: 8.75inx22in and 0.06in (1.5mm) thick. Also need to have lenses that have a 45mm focal distance,magnets approximate size: 0.75in diameter and 0.12in thickness, one rubber band, to prevent the phone from sliding out. It’s also needed to have a ruler, glue, and scissors, an X-acto knife. And a bit of creativity.

How to play Google Cardboard apps on Gear VR

The idea of Virtual gaming has been around for several decades. But back then it was just the fantasies of little boys and girls and nerdy game makers. Fast ...

A couple of days ago, Sony announced its revamped PlayStation Gold Wireless Headset for a rejuvenating PSVR gaming experience. At just $99.99 retail price, ...

Block Blaster VR is the latest addition in the VR games family. The game brings together two genres in the gaming world: arcade style shooter and puzzles. When ...

Today we got a chance to experience two relatively new Virtual Reality Roller Coaster VR applications for Android and iOS. Both of them are coming from the ...

After years of speculations and few releases of VR devices, the era of virtual reality is now, once again upon us. With numerous expected releases and more ...

Roller Coaster VR experiences are something you should try on VR headset. We bring you the list of the best VR Roller Coaster journeys so far. Google ...

Is there any better gift than Google Cardboard that has ability to transform any Android 4.1 smartphone into a virtual reality device for just a $10. The ...

Virtual reality became a popular way for musician to promote their work, so the former White Stripes frontman Jack White decided to try on possibilities of the ...

The Jaunt company, which is known of cinematic virtual reality, introduced to the public its first movie based VR content. The experience is designed for the ...

Paul McCartney VR app gets you on stage

To sit in the first row at Paul McCartney’s farewell to Candlestick Park Concert in San Francisco last August you should have to pay over $500. Today sitting ...