SketchUp Viewer on Microsoft HoloLens is an Indispensable Tool for Architects

Microsoft HoloLens was a groundbreaking unveiling that truly defined our passage into the future of virtual reality devices. On October 12th, 2016, when Microsoft announced that it would be releasing HoloLens as a product available for pre-order in certain countries, many developers rushed to create applications that would enrich the product’s experience.

Trimble, which now owns SketchUp Viewer, also announced the release of its cutting-edge app for HoloLens. The two technologies when coupled together make the perfect tool for an architect to design, validate and improvise on complicated architectural projects that would be considerably harder to implement on paper. To get a better understanding of how this is possible, let us take a brief look at both technologies and assess their capabilities.

Let us first examine the platform for SketchUp Viewer: The HoloLens itself.

This device is basically a head mounted display which is very flexible and responds to the slightest of angular and positional changes. This is possible because of the presence of the Inertial Measurement Unit present on the HoloLens. It looks pretty much like a helmet from a science fiction movie since it comes equipped with a visor as well which serves as a heads up display. It will be a very natural addition to any architect’s design tools mainly because of the presence of spatial mapping and gesture recognition capabilities.

Secondly let us look at the application in question. SketchUp has been popular since the days it was owned by Google. It is a 3-D modelling tool that allows the user to build and customize complex structures from scratch or by using a preset model. It caters to the needs of artists, architects, automobile engineers and many others. The possibilities with the app itself are limitless. 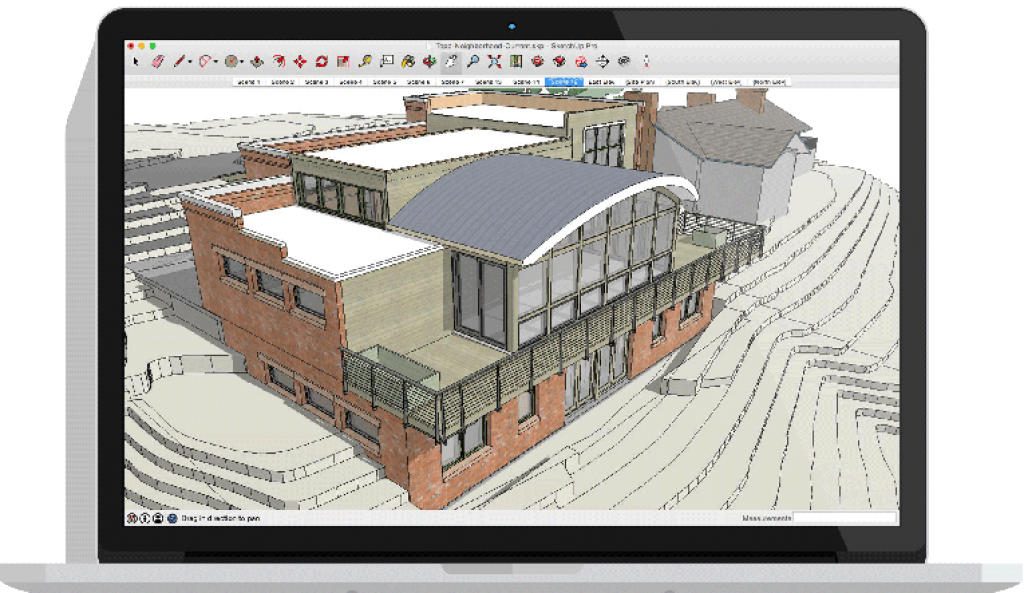 Architects have found the app to be particularly helpful because it simplifies the modelling process for structures. A three dimensional virtual design conveys far more information and reduces errors when compared to a corresponding representation on paper. Hence 3-D models are utilized more by architects when it comes to final design considerations, simulations and aesthetics. The overall look and feel of anything the architect designs can be fully perceived and understood through a model in SketchUp.

So how do these two technologies come together to form a powerful tool for architects? The models that an architect creates in the PC version of SketchUp is still limited to a screen which is a 2-D surface. Essentially, when an architect designs on SketchUp Make or SketchUp Pro, he/she is creating a 3-D rendition of a structure which is confined to a 2-D screen. Microsoft HoloLens combined with SketchUp Viewer crosses this barrier. The architect is now capable of designing 3-D models in 3-D space. Other architects or even normal people can clearly understand the virtual structures created by an architect.

They can interact, modify and rigorously analyze the model from every angle. In fact SketchUp Viewer takes this experience even further by allowing architects to model entire buildings with a 1:1 scaling. This means to say that the architect and his clients can walk around and examine the virtual finished structure from the inside. Imagine walking around your future house in virtual space years before it is built. This gives architects a new freedom that was previously absent. Buildings can be designed and verified in such a way that both the architect and the customers are satisfied.

HoloLens integrated with SketchUp Viewer is truly a doorway into the future of architecture. It has completely changed how we view traditional architecture and might even change the way architectural design is taught at institutes. Thus it can be safely concluded that SketchUp Viewer for HoloLens is not just an asset to an architect, but indeed a must-have.