When Serious Sam VR: The First Encounter was first publicly launched on December 20th, 2016, the gaming community welcomed the masterpiece with open arms. It had been 15 years since the first release of the game series and the Croatian based development team decided to revamp the old classic with ‘Full Locomotion’ VR.

Serious Sam: The First Encounter was released by Croteam for PC way back in 2001 and proved to be a game that delivered an action packed First Person Shooter that received very positive reviews from gaming enthusiasts worldwide. The series grew in popularity exponentially with every new release while competing with other equally prodigious franchises such as Doom and Quake. Serious Sam is also acclaimed for using its own engine known as the ‘Serious Engine’ which was designed to handle huge view spans and a colossal number of models.

With the new VR release, the game is staying true to its core mechanics while adding many interesting features and embellishing it with fresh graphics.

Serious Sam has always endeavored to give players an extremely fast paced experience. The game is rated 9/10 on the Steam store. It follows the actions of Samuel “Serious” Stone who aspires to defend humanity against the alien invaders lead by ‘Mental’. This particular installment of the series takes Sam back to the picturesque deserts of Ancient Egypt where he battles a multitude of enemies that attack you in huge mobs. Having to battle against ‘Werebulls’ (an enemy that resembles a charging bull) in virtual reality is truly an exhilarating experience that will test your instinctive responses. The infamous warlock Ugh-Zan III is also back with his fireballs. Be sure to use every tool in your arsenal to complete this classic boss fight. 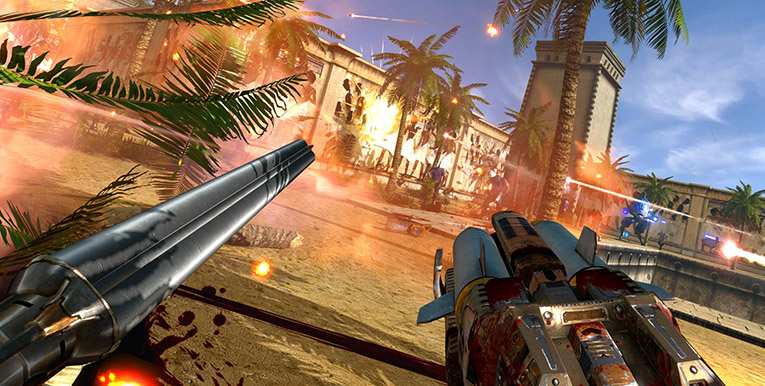 One of the chief complaints that people had about VR First Person Shooters was that the teleport mechanic was not an effective means of moving around in the game space. Serious Sam VR has completely opened up this mechanic and it gives players the choice between the Vive track-pad, the Oculus Touch controller and teleportation based movement. The player can use different locomotive methods for different campaign missions as well. The game features 15 campaign missions filled with hardcore shooting action. The unending stream of enemies and the vast variety of ways in which you can deal with them gives the game a vibrant feel.

The AI is largely the same and involves enemies charging directly at you. The challenge isn’t provided by the individual enemies themselves but from the sheer number of creatures that are constantly attempting to run you down. Deviating slightly from the original release, dual wielding has now been made possible. Players can use two weapons of the same or different kind. This has proved to deliver an extremely fun experience that encourages you to experiment with different combinations of weapons and see what works best in a situation. There are about 10 different weapons including revolvers, chainsaws, shotguns and much more that is bound to keep you glued to the screen for hours. 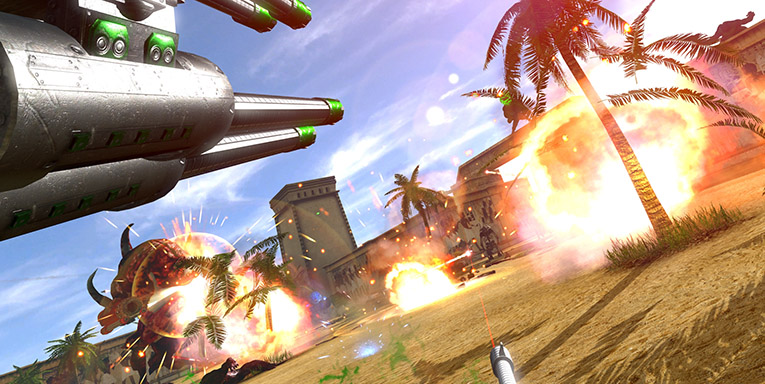 Croteam also decided to include the multiplayer game mode consisting of many variants. You can play it in campaign co-op mode with up to 16 other players. The difficulty level can be altered to make the experience leisurely and fun or hardcore and challenging. There are 5 different difficulty levels that allows you to tune and optimize the game according to your requirements. The game also offers a survival mode for both solo and team based game-play. These game modes, where you cooperate with other players to hack away at extraterrestrial invaders, offer a very satisfying and memorable experience.

There have been a few issues, however, with competitive matches where players face each other. There were some glitches when players chose to use the teleport mechanic. It is a little unfair for people using the standard movement with the touch-pad or controller because the players using the teleport system tend to move very rapidly and unexpectedly. It is hard to pin-point their location accurately and gun them down giving rise to unbalanced game-play which was not well received by the community. In all other aspects, the game provides very active and precise combat that can be enjoyed by old fans as well as players new to the franchise.

Serious Sam VR promises a very nostalgic experience. Players who played the first release back in 2001 will relive all the magical moments that it provided back then. The VR port has a few glitches, but in general it has been quite well optimized. The game has been freshly rendered and uses a new and improved engine that assures smooth game-play. While the level design and mechanics have not changed much, the game is still very enjoyable and fierce. Serious Sam VR is certainly a must-buy for anyone willing to face the intense and energetic challenges that define Serious Sam: The First Encounter.

How to Play Doom VFR on Oculus Rift