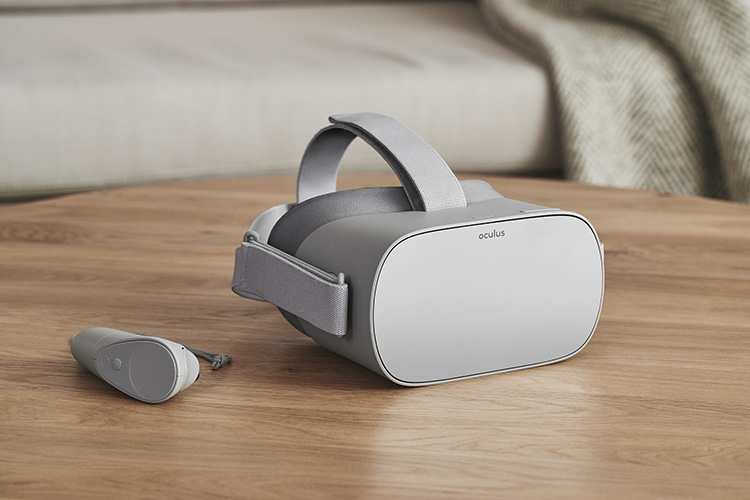 On May 1st 2018, Oculus announced the Oculus Go, a VR headset priced at only $199. But unlike other headsets on the market, the Oculus Go is a wireless and battery powered all-in-one solution. This means that while it is similar to headsets like the Gear VR which require you to mount your phone inside of it, the Oculus Go already includes all of the hardware built in. No phone is required. This is great for those who are new to VR and those who are looking for a cheaper and more casual experience. Oculus is owned by Facebook, so we expect to see lots of social features in the Oculus Go as well. The Oculus Go will launch with over 1,000 games and applications available, so there should be no shortage of entertainment for early adopters.

Let’s take an in-depth look at the Oculus Go:

The Oculus Go is built with comfort in mind, with lots of foam and a nice knit mesh to help prevent sweating while using in those long VR experiences. It is super lightweight design at just a little over a pound. This is less than the Samsung Gear VR with a phone attached. It should easily fit over a pair of glasses and also includes a glasses spacer if you have larger framed glasses. (Rumor has it you will be able to get subscription lens that can sit atop the Oculus Go LED frames inside the headset as well.) 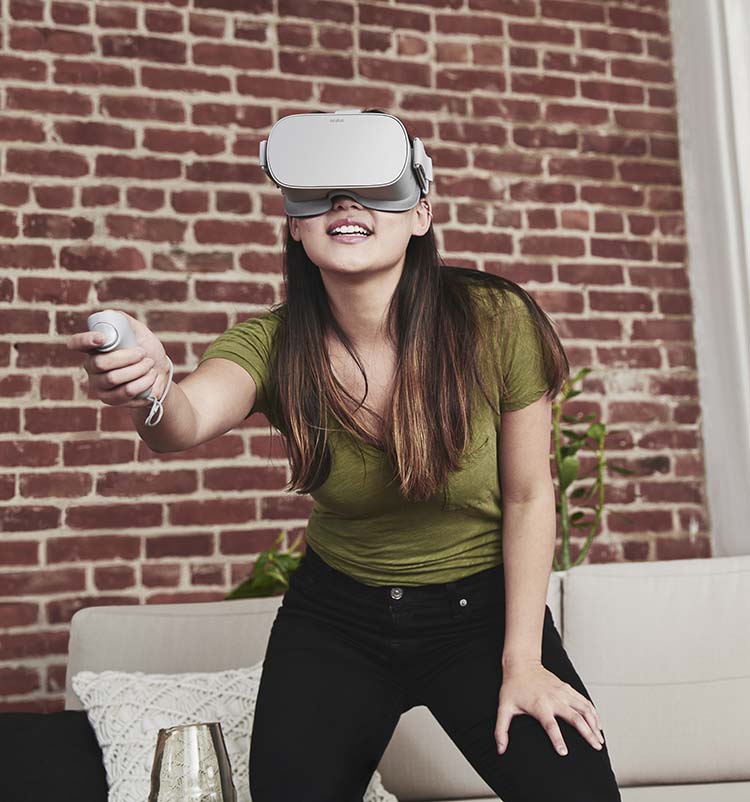 The Oculus Go is equipped with a Snapdragon 821 Processor and either 32 or 64GB of storage. It is also equipped with a 2560 x 1440 Fast switch LCD Screen that refreshes at 60-75HZ screen similar to many of the higher end VR headsets today. It has built in speakers, but if you don’t want everyone to hear your VR experience you will have to attach a pair of headphones to the Oculus Go. It has three degrees of tracking when moving your head around but won’t track your position in space like the Oculus Rift or HTC Vive.  You will have to wait for the new Oculus Santa Cruz or HTC Vive pro with wireless adapter to have wireless room tracking but will sure cost you a lot more than what the Oculus go will cost you. The Oculus go includes a wireless controller that is very light weight and is a defiant advancement over the Gear VR controller. The controller has a track pad and a front button that is essential to interacting with VR environments. You will have to Sync the Oculus Go device to the companion App with your phone. The device is compatible with both Apple iOS and Android phones. You will still need to be connected to Wi-Fi to get new apps and connectivity. The Oculus Go will give you about two hours of battery life playing games and more than two hours watching videos.

Cons: No room or environment tracking, Limited to 3 degrees of head tracking, around 2 hrs. of battery life. Limited to just Apps.  Smart phone and wifi needed for downloading apps.

If you’re new to VR or not ready for all the high tech computer equipment needed to run the HTC Vive or Oculus Rift then this is a great option for you. It’s a great device for watching video with friends and interacting with all the thousands of VR apps out there. It is a very comfortable device without any cables to tie you down. You can lie on the couch and relax in your VR environments or play and interact with other users in amazing VR worlds. I will definitely be using it to check out Netflix in VR and getting people to try VR environments for the first time, not just wired up in my office but anywhere. Personally I am super excited about this product because it opens the VR world to the mainstream audiences everywhere and encourages creators to push out more VR content for us all to enjoy. 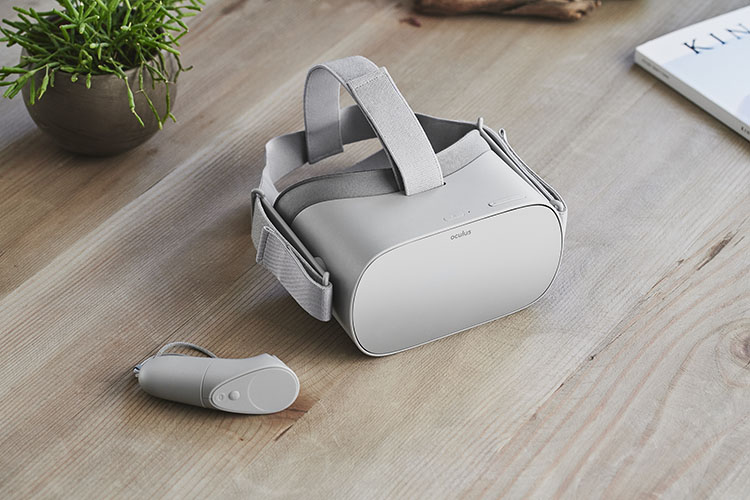 Power Adapter (US Only)

Integrated Spatial Audio speakers built into the headset, transporting you straight into VR and making the headset easy to share with someone else.

Standalone VR no additional devices required while in VR (Oculus Go requires the Oculus Companion App, downloadable from the iOS and Android store on a smartphone).

Low VR entry cost at only $199 for the base model.

Sorry. No posts in this category yet