December is the month for some indulgence – for yourself as well as your loved ones! And you can’t go wrong with a Sony PlayStation VR bundle under the Christmas tree! Something tells us that is what you will be putting there for your special someone this year (or hoping to get for yourself!). We have here all the great PlayStation VR deals that are lined up for December so you can make up your mind – if you have not already! The great thing about the bundled offers is that you can pick up exactly what you need – whether it is the PS4 camera or the exciting VR games.

Following what was PlayStation’s biggest showing in its 22 year history during Black Friday this year, Sony has lined up some incredible deals on both stand-alone and bundled units of the PlayStation VR headset. First things first, assuming you already own a PS4 and a TV, what you will need in addition to the VR headset is the PS4 camera without which you cannot operate your headset.

The camera in itself comes at a price of $60 and your headset is useless without it so a bundled option makes a lot more sense. In addition, you will need to rely on your DualShock 4 controllers to bring your movements into the games. But for a far more immersive VR experience, invest in a couple of Move controllers that give you more flexible and active VR movements.

There hasn’t been a greater moment in which to gift yourself the Move Controllers as well as some fantastic new games alongside to really immerse yourself in the VR experience.

At $199.99 the PlayStation VR Gran Turismo Sport Bundle gets you the PS VR System, the PS 4-camera as well as a copy of Gran Turismo Sport & the new PSVR demo disk. This is the cheapest the PSVR systems has ever been available for, considering it was &199.99 for the standalone unit before.

For $299.99, you can get your hands on Playstation VR Doom VFR Bundle that offers you the PSVR headset, a copy of Doom VFR a PS Camera, and the new PSVR demo disk. 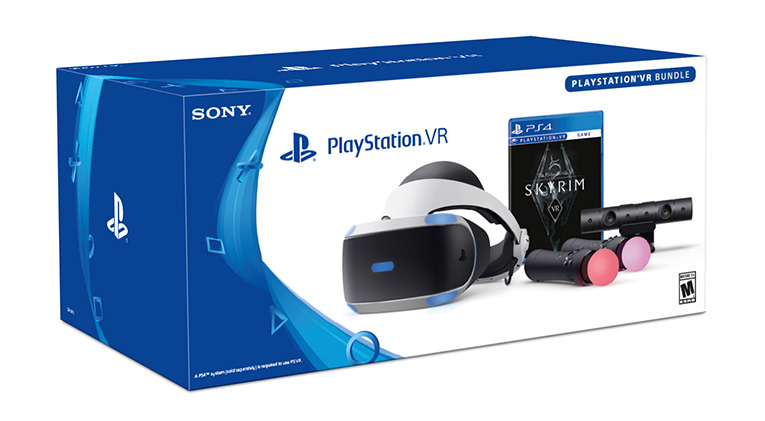 If you have been a fan of the Skyrim game and are willing to shell out $349.99 you can now experience the game in VR. With the PlayStation VR The Elder Scrolls V Skyrim bundle, you can get, in addition to the VR headset, PS Camera and PSVR demo disk, two PS Move Controllers and a copy of Skyrim VR.

In case you are wondering which deal will work best for you, why not just consider getting the basic bundle since the games can be purchased separately for around $30.

If you need to get yourself a PS4 to get started, go for the PS4 Pro that is now going for $349.99, which is $50 off the regular price. You can also get a standard version for around $280. Which means, this season is your best chance to get yourself the whole VR package for under $500.

These fantastic deals are yours for the taking from December 10th to 24th in the US. Get in early and get your Christmas shopping out of the way. In style!