Grounded Vindaloop is the name of recently broadcasted South Park’s episode that was focused on Oculus Rift and old fearfulness that follows virtual reality. Immersing inside a meta virtual reality characters in this TV show also makes fun of outsourced customer service. Several last seasons led the show to the different tracks, and it undoubtedly became significant instrument for social commentary nowadays. 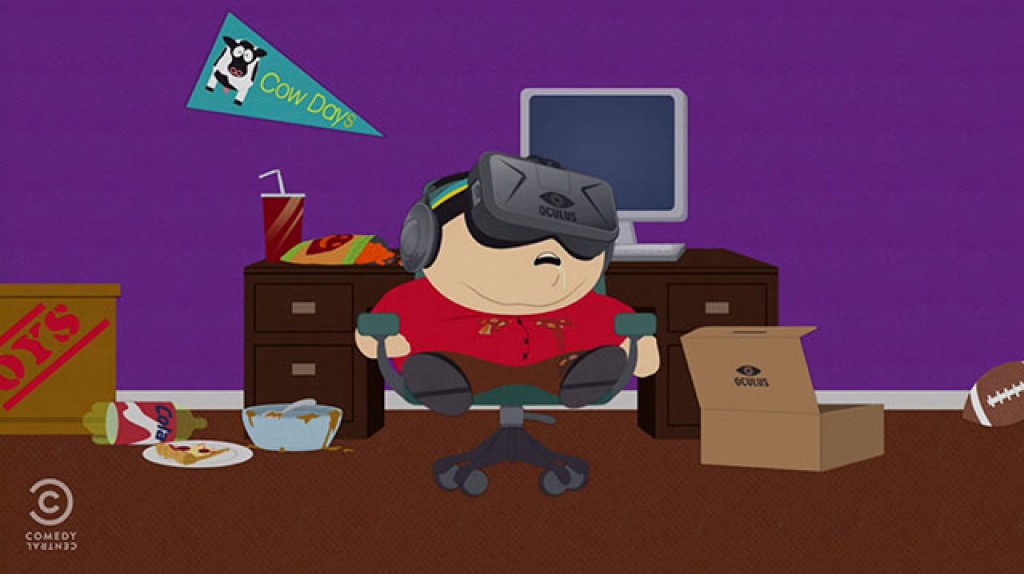 South Park is a show that points finger to different kinds of critical issues, for example outbreak of immaterial startup enterprises that are troubling crowd funding sites like Kickstarter, and also highlights the harmful character of Black Friday consumerism. Anyway it’s unexpected that VR community has yet been awarded with their badge of honor.

At this episode leading figures have tried on the ‘Oculus’ that represents a parody of the Oculus Rift DK2. They, separately, couldn’t decide if they were truly in the reality or yet caught in virtual world staying paralyzed in front of their computers. There is a question which level of the simulation is real, and who can feel it?

The VR device was attached to Cartman’s face making him feel a bit numb. The other normally healthy characters weren’t in threat of getting into hyperreality – to be unable to tell the difference between reality from a simulation of reality, because of technology level today. Even founder of Oculus VR Palmer Luckey states that there is so much to do before we are able to ask ourselves if we’re in a virtual or the real world.

At this moment we can’t know what future will get to us but it’s evidently that level of in-game detail is increasing. VR devices are also completed with additional peripherals, like controllers, omnidirectional treadmills, and many others unpredictable devices and that can make VR almost real.

Department of Personality, Assessment and Psychological Treatments at the University of Barcelona has published a paper that has explained how VR had been demonstrated as a good tool for treatment and rehabilitation of psychotic patients. It also helps to raise highest mental relationships with their environment. Simulations made in medical purposes could also allow us to better understand trigger mechanisms and prevents outflows in the future. It’s even possible to make similar kinds of techniques so people with no particular mental illness can stick tight in the real world, while enjoying VR.