TPCAST is a Chinese company which is developing an accessory for the HTC Vive. First announced in November, the accessory is an upgrade kit which allows users to use their VR headsets wirelessly. It makes wireless HTC Vive. This technology uses a dongle connected to a computer, a video transmitter, which has a 160-degree field of view, and a head-mounted receiver. TPCAST recommends the that the transmitter be set above the middle of the play space, facing downward. The receiver connects to the headset via short wires.

The receiver and headset are powered by a portable battery. Buyers will have a choice of selecting between two different batteries. A larger capacity one, rated to last five hours, which must be stationed in your back pocket and connect to the headset via a long wire. Or a lower capacity solution mounted to the back of the Vive headset which lasts for two hours. The latter is currently available for pre-order in China.

Recently UploadVR had the opportunity to try out this accessory. They tested it extensively and put it to its limits. A TPCAST crew was present with them to help set it up. They tested the device in a play area of 4 meters by 2.6 meters using a high powered gaming rig featuring nVidia’s best graphics card. TPCAST states that the device will be functional in play areas up to 5 meters by 5 meters in size, under ideal conditions.

The previewer had spent countless hours in VR environments created by wired HTC Vives. He was impressed with TPCAST’s product and noticed no significant increase in latency. TPCAST’s CEO states that it doesn’t increase the HTC Vive VR headset’s latency by any more than 2 ms. The overall latency is much lower than the 20 ms required for comfortable use. VR applications like Google Earth VR, Valve’s The Lab and Tilt Brush worked just as well wirelessly as on a wired HTC Vive. However, the occasional and rare occurrence of artifacts reminded the previewer that he was wireless. The artifacts were like low-resolution patches which occurred momentarily. They didn’t affect the overall experience, though and were one-off occurrences that were hard to recreate. He also appreciated the lack of hindrance achieved by going wireless. 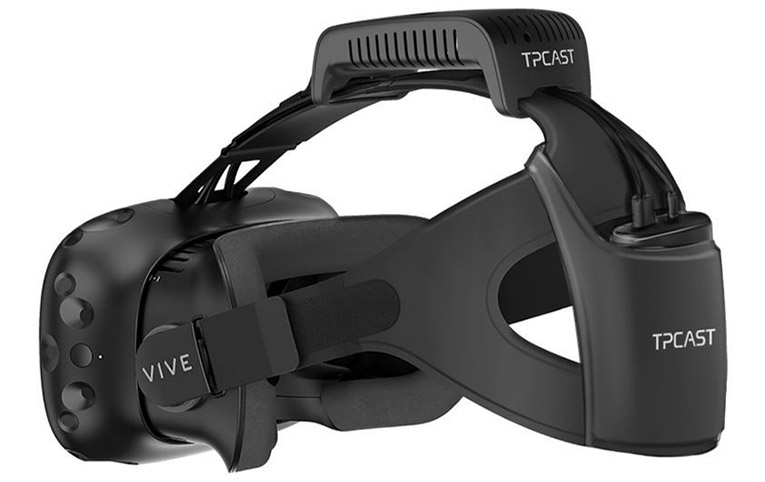 In spite of being connected wirelessly, the upgrade kit wasn’t affected by any interference caused by other wireless, electronic devices and metal objects in the room.

UploadVR even brought it a professional gymnast to test the accessory’s tracking of extreme movements which are only possible with a wireless headset. He performed a variety of acrobatic stunts trying to push the accessory to its limit. The upgrade kit had to trouble keeping up with his fast movements and jumps and crazy maneuvers like back-flips and hand-stands. Despite accidentally falling off his head a few times, the headset and receiver continued to work just fine after the TPCAST crew everything got everything up and running again.

In conclusion, the TPCAST accessory for the HTC Vive fulfills its promise of delivering an untethered VR experience. The latency is unnoticeable and the lack of wires attached to them back of the headset to connect it to a computer makes the Vive feel lighter. The upgrade kit will be available in China in early 2017 with a US release slated for later in the year.

Doom VFR – Everything we know so far