It seems that adult webcams sites are determined to take their virtual sex games to the next level. CamSoda, which is one of the leading adult streaming company, recently announced Virtual Intercourse with Real People (VIRP) – something that we’re not quite sure whether you’ve ever heard of. As you may already know, this adult webcam platform has been offering a combination of VR headsets & male masturbator devices, thanks to the existing technology known as “teledildonics” which mimics real sex.

But now, they’ve added the highest-tech sex dolls (RealDoll robots) to the mix, as well as real people. Beautiful models, who show up in virtual form, and you can see them via your googles. The idea here is that as a user, you can have intercourse with a robot while at the same time enjoy sex with a human inside of VR.

How Does CamSoda’s VIRP Works?

To use CamSoda’s VIRP, you’re expected to select the type of RealDoll that matches with a real cam girl, who you can see inside the VR. The robot then pairs with your Smartphone via a male masturbator known as LoveSense Max, and stimulate movements, mimicking the feel of intercourse. At the other end, the performer/model uses a Lovesense Nora sex toy, which sends all the movement data to the doll and this ensures that she gets a little something out of it too. 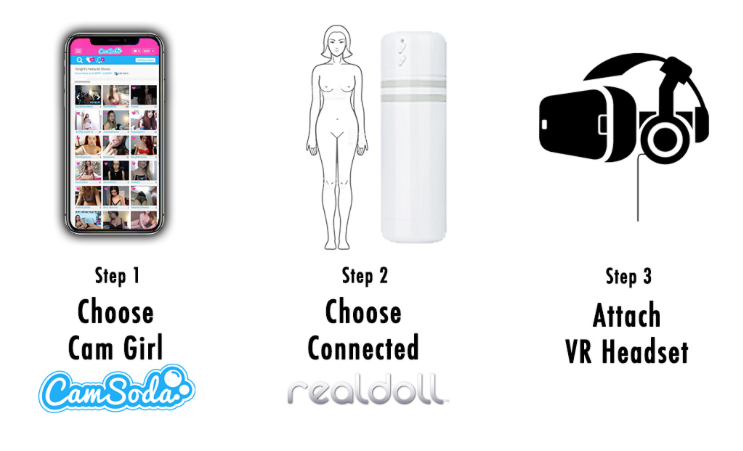 Is CamSodas VIRP Worth It?

Daryn Parker, who is Camsoda’s VP, held a press statement and said that there has always been speculations as to how the adult industry would harness its technology to deliver the ultimate sensory experience, especially one that can mimic real-life interactions, and intercourse. He claimed that their partnership with Real Doll is a game changer, allowing their fans to enjoy virtual sex with real people.

Parker describes CamSodas VIRP as an excellent product can fulfill your deepest desires. This was in response to a suggestion that this technology might be considered as weird and unnecessary by most people. In fact he said that 15-years ago, people thought that phones looked weired, but that isn’t the truth in the modern day. Of course he admitted that there may be initial hesitation, but concluded by saying VIRP will soon be as popular as the smartphone.

As a user, you’re free to interact with your favorite cam model via live virtual reality & in real time, and simultaneously feel the sensations of actual intercourse via your RealDoll and teledildonic integration. That’s definitely an amazing experience. But this initiative isn’t an affordable one. RealDoll robots retail at a price that starts from $1,500, (where you just get a torso) and if you want an entire body, you’ll have to spend up to $10,000. Also, it only supports one male masturbator – $99 LoveSense Max.

We think that CamSodas VIRP is a great product, but if adult indusrty is really going to drive VR forward, then it still needs to be offered at a reasonable price that most people can afford. If you are a girl/woman, you should note that CamSoda is working on VIRP for female. In consideration of everything we’ve discussed in this article, would you try CamSoda’s VIRP if it’s all you need to enjoy an unprecedented immersive experience?

Added to wishlistRemoved from wishlist 7