The newest trailer for Ready Player One shows the conflict that is happening inside the VR world called The Oasis. The film adaption of the novel by Ernest Cline is shaping up to be a visual delight.

Many book fans who previously read the original novel started to notice the differences in the movie plot since the first trailer dropped last year, instead of 17 our protagonist Wade is 20 years old
currently living in the year 2045 where The Oasis exists as a virtual reality world that people can enter to. In the future, for many young adults like Wade and the like, The Oasis world its way better to live in and it’s a true chance to escape the bleak real world they live in.

Ready Player One: Come With Me

Like Wade explains in the novel and by some extends in the trailer, The Oasis is where he can feel like he is truly something. He spend most of childhood in a virtual simulation of Sesame Street and singing with the Muppets, most of his education came from The Oasis free educational programs where he could learn new skills and things with interactive games and activities, where every single piece ever created by humans was there, you just had to visit it. For Wade and many others The Oasis reality it’s all they ever known.

A proclaimed Holy Grail of pop culture, the novel is filled with 80s and 90s references which seem to follow the movie adaption with the shots of the Batmobile, Harley Quinn, the Iron Giant Gandalf, Freddy Krueger and many more in the first trailer and newest one as well, establishing a well-known fact about The Oasis and how every piece of media ever created exists in this world.

In the newest trailer Wade proclaims that people don’t stay in the Oasis because of all the bending opportunities but because they can be who they want to be. The Oasis is different from any other virtual reality we seen, not only it’s not limited but also the people living in it can leave and come in as they desire, unlike the Matrix where is virtually impossible to scape it’s world. 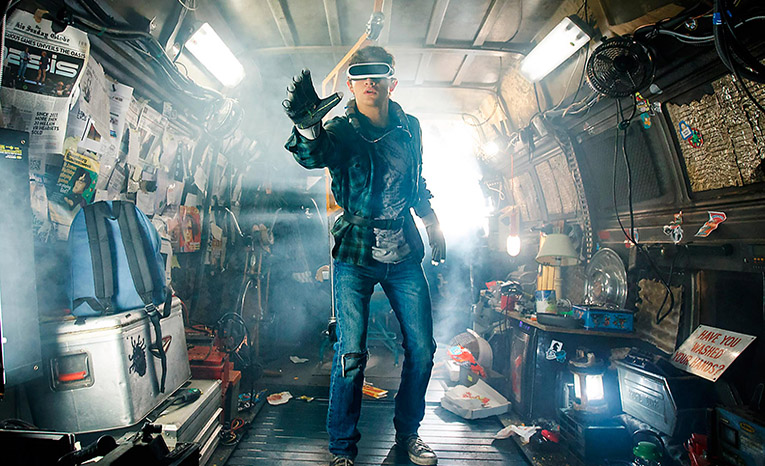 While the novel never went into depth how the set piece for entering The Oasis actually worked, here in the movie adaptation in takes form in the VR set which is the modern technology to enter virtual reality and its use makes a lot of sense in this case. While everything is dandy in The Oasis something else it’s happening in the real world, the trailers don’t go into detail about what consequences the virtual world is bringing to the real world but it show a real life battle that takes in the virtual world and it will be part of the secret that makes The Oasis what it is.

Ready Player One is being directed by no other than Steven Spielberg and will hit theaters in March 2018 promising to be an exciting and beautiful one of kind adventure.