While you go over your best moments from the year gone by, Valve has published an year-end list of the top selling games as measured by the gross revenue generated in 2017. For the first time, Virtual Reality titles have made the cut, showing the best selling VR games on Steam. With the promise of an exciting VR-only experience, these titles are compatible with HTC Vive, Windows Mixed Reality, OSVR Hacker Dev Kit, Oculus Rift, Windows Mixed Reality and any other head-mounted display.

Starting with Platinum list, Fallout 4 VR by Bethesda ruled the charts, despite being hardly a month old, thanks to the rather steep price point of $60, and a loyal-fanbase. Other well-known titles that bagged a place in this category, included Rick and Morty: Virtual Rick-Ality by Owlchemy Labs, Tilt Brush by Google, Superhot VR by Superhot Team, Raw Data by Survios, Job Simulator Owlchemy Labs and Arizona Sunshine by Vertigo Games. Other honorable mentions include indie-games like Audioshield by Dylan Fitterer, Onward by Downpour Interactive, and Space Pirate Trainer by I-Illusions.

Interestingly, a lot of 2016 releases – Hot Dogs, Horseshoes & Hand Grenades by RUST and Gorn by Free Lives – are also in this category, which raises a big question on the gaming development in the VR space, as not a lot of big VR hits have come out of 2017.

The Gold category has some expected titles like Batman: Arkham VR by Rocksteady Games and Doom VFR by id Software. With the addition of I Expect You To Die by Schell Games, Vanishing Realms by Indimo Labs, Dead Effect 2 VR by BadFly Interactive, The Talos Principle VR by Croteam, QuiVR by Blueteak, and Paranormal Activity: The Lost Soul by VRWERX, it is clear that players are ready to invest in a well-made plot with more content to offer. 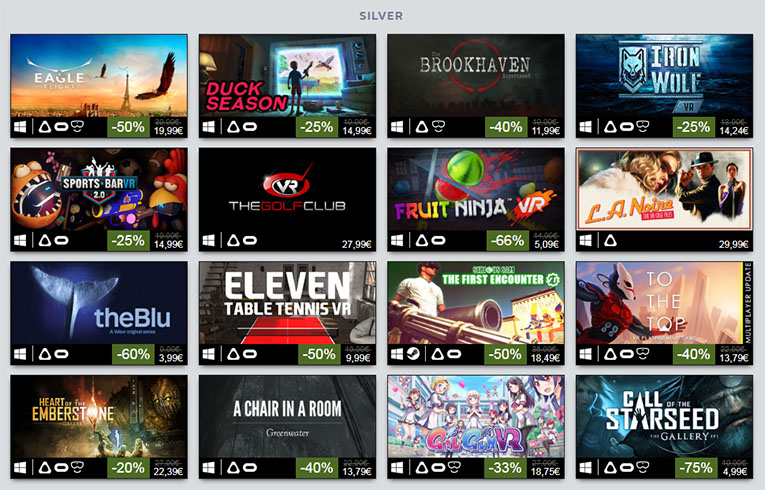 Unlike the previous categories, Silver is where you will find an abundance of best selling VR games that were released 2017. L.A. Noire: The VR Case Files by Rocksteady Games was released only a few days after Fallout 4 VR was dropped, which obviously seems to have left a setback on sales. Other notable features include The Gallery Episode 2: Heart of the Emberstone by Cloudhead Games and Duck Season by Stress Level Zero.

The list finally ends with the Bronze category featuring Killing Floor: Incursion by Tripwire Interactive, Form by Charm Games and The Invisible Hours by Tequila Works, that are worth taking a look.

It is important to note that some of the above-mentioned gaming titles (like Fallout 4 VR, and Tilt Brush were bundled at some point with the sales of HTC Vive, affecting the gross estimation in the process.

As compared to 2016, 2017 might’ve not been the best year for VR in terms of accelerated growth, however there is one thing that’s clear: The gaming titles that made the Valve’s ‘Best Of 2017’ list, come from both well-established developers and budding indie-studios, so the future of truly-great VR games is finally here.