Samsung company just announced the new version Gear 360 4k camera, a camera that is more attractive and has more advanced features compared to the previous one.

The camera is mushroom shaped with a spherical top and a handle below it making it preferably simple to film while holding the device. Basically, it has an eye like design similar to the previous one. It weighs 3.0 grams and can connect to other devices through a USB 2.0, Bluetooth or via WI-FI.

Different from the previous model that had 15 mega pixels’ sensors that had their own lenses at both sides of the cameras head, the new 360 Gear model has a pair of 8.4 mega pixels’ fish eye cameras. This results to 15mp photos from both models.,

Moreover, the Samsung 360-degree camera has its battery stored on its body unlike on the head with old model. The battery is a bit smaller compared to that of the original device which is easier to hold. It is rated 160mAh in comparison to last year’s model battery rated 1.350mAh.

In order to support or store the device, you only need to rest it on a small tubed rubber-shaped ring that comes together with the Gear 360 camera when new. 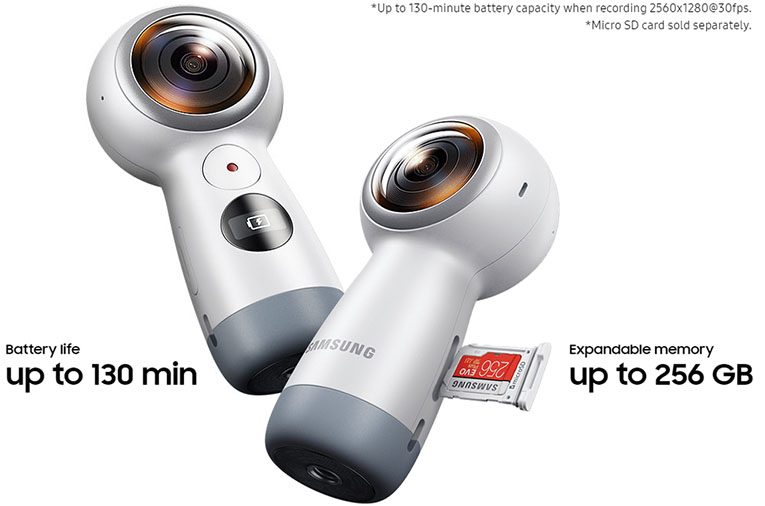 The camera favors social media buffs because it can live stream a video in a 360 degree at 2k resolution, a new feature that the original model was missing. What’s more, the company’s own VR app on the Gear VR allows you to watch panoramic content in 3 Dimensions.

The original device can pair with many more smartphones, recent smart phones and other android phones that runs IOS 10 and has the recent versions of iPhone and you can control it remotely. Last year’s model pared with less Samsung phones like the S7 edge and the Galaxy S7.

The company has not yet announced price for the camera and when it will be available to other region beyond but has promised that the new model will be easily and more accessible compared to last year’s model that costed $349. Samsung is more determined to make it possible for her customers to access photos and videos in a 3 dimension.

The only way to allay the following features is to get a consumer ready model for a try. Hopefully the gadget will serve the right purpose.

Which Samsung Galaxy phone to buy for Gear VR